Digital Get Out The Vote Tactics & Results

Stoneridge Group recently completed a digital and direct mail Get Out The Vote effort for conservative Idaho Congressman Raúl Labrador.

While Congressman Labrador was expected to win, he was in a three-way primary and the campaign set a high bar: their goal was winning by at least 80%. Over 80% in a 3-way race in an anti-incumbent year – that’s a daunting task!

At SRG we embrace challenges. And on May 17, 63,690 Republicans cast a vote in the race and Congressman Labrador exceeded his goal with 81% of the vote.

IStandWithRaul.com was equipped the top 3 reasons to vote for Raúl, a tool for voters to find their polling place, and resources to share support on social media. Re-marketing codes placed on the site allow us to target visitors on future Facebook and Google advertising. 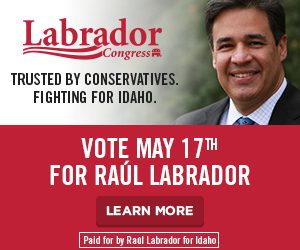 We bought out a large portion of available display inventory targeting voters who’d cast ballots in two, three, or four of the last four primary elections. This was valuable because it guaranteed us a minimum number of impressions (north of half a million) to real individuals who were likely to vote again

SRG ran a general display campaign alongside the targeted one. This is important because not all people can be tracked online or matched with cookies. There will also be first-time voters or other less reliable voters who would otherwise be missed—and it’s a cheaper method. We targeted potential voters on specific website placements, interests, and keywords.

On Facebook, we ran a small lead generation ad encouraging supporters to commit their vote to Raúl. The goal here was to grow our email list and capture a motivated pool of Raúl’s voters. Each voter who pledged their vote received an email from Raúl thanking them before Election Day. 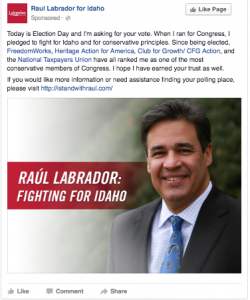 We wanted to run an ad close to Election Day that highlighted Raúl’s strong conservative record and endorsements from groups like Freedomworks and Heritage Action for America. Our closing argument ad reached over 16,500 people within the 1st Congressional District an average of about 1.5 times—strong resonance with a big audience.

We wanted to make sure that anyone who was interested in Raúl or voting received a message from us.  These individuals are almost certainly going to the polls or influencing others and there is no more important group of folks to talk to. On Google alone, our ads appeared on over thirty thousand queries.